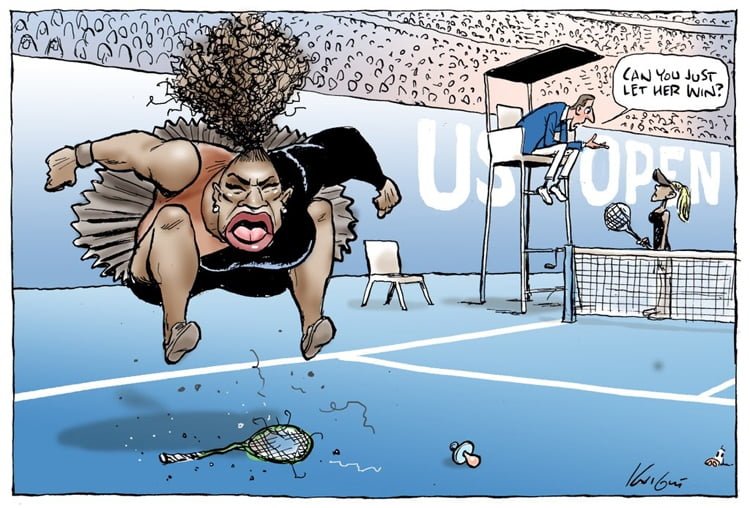 (1962) about Serena Williams
The joke was published on Sunday 10 September 2018 in the tabloid Herald Sun (Australia), the newspaper he has worked for for almost three decades.

A new case that follows all the patterns. A cartoonist makes a cartoon, some people start criticising it, the thing fattens up and it becomes a ball. Suddenly, some famous or relevant people join in and do the same, the media echo the opinions and headlines of the type “such a thing outrages the networks” are reproduced.

That’s pretty much what happened with this Night cartoon, which illustrates his view of Serenna Williams’ reaction after losing the US Open final to Naomi Osaka.

In the cartoon, Serena Williams is shown with an angry face jumping on her racket, on the ground there is a dummy, which she is supposed to have spat out and which suggests a childish tantrum. In the background the chair umpire asks her opponent:

Criticism of racism and sexism

Many media highlight the opinion j.K. Rowling on Twitter, who called the cartoon racist and sexist, although it is true that there was much criticism of the cartoon, which has been described as racist, sexist, misogynistic, obscene, trashy, insulting, grotesque, deplorable and disgusting, among other things. There was also no shortage of those who called for the dismissal of the cartoonist and the publisher.

Several people compare this cartoon to those of the early 20th century and some even claim that in 100 years it will look no different from the Jack Johnson cartoons or the old Jim Crow images.

Among those who criticise the cartoon, various arguments are used, ranging from accusing the cartoonist of using racist stereotypes and dehumanising Serena Williams, due to the type of drawing and her features, by presenting her as exaggeratedly muscular or thick, like an angry creature to depicting her opponent as a blonde and white woman when she is of Haitian father and Japanese mother.

Mark Knight tried to defend himself by saying that this is how he draws, that this is his style, I suppose trying to explain that exaggeration is just another humorous device, but critics continued to point out that Naomi Osaka was not drawn with these features or in such an exaggerated way.

Where are those cartoons about all the men who have broken their racquets over the years?

To which Mark replied:

at the US Open was misbehaving. Don’t resort to gender when it comes to behaviour. I will accept your apology in writing. 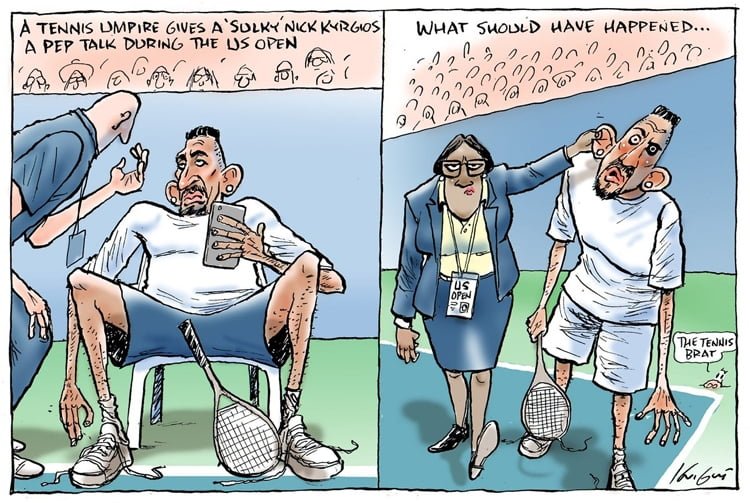 Others also took the opportunity to recall the cartoons about John McEnroe’s frequent sulks.

“A tennis champion had a mega tantrum on a world stage is what Mark’s cartoon depicts. It has nothing to do with gender or race”.

For his part, the cartoonist said he was “surprised” by the reaction to his cartoon.

“I drew this cartoon on Sunday night after the US Open final, and seeing the best tennis player in the world having a tantrum, I thought it was interesting.

“It’s been picked up by social media in the US and my phone has melted.”

“I tried to respond to these people, but they just don’t want to listen to me, any day you’re a hero and the next day you’re a pariah, you have to live with that.”

“The Serena cartoon is about her bad behaviour that day, not about race. The world has gone mad.

The paper would later publish an editorial headlined “Mark Knight’s cartoon rightly mocks Serena Williams’ US Open tantrum“, which rips off like this :

“The world has officially gone mad as a celebrated cartoonist is condemned by the social media hordes for depicting a famous sports star throwing a tantrum”.

They add that “arguing that Williams’ drawing is racist is an attempt to defeat cartooning, and satire, with a barrage of political correctness“.

On Wednesday 12 September, the Herald Sun again published the Serena Williams cartoon, this time on its front page, among other Knight cartoons and under the headline “Welcome to the PC world”. (Political correctness).

Inside, it devotes five more pages to defending its cartoonist. 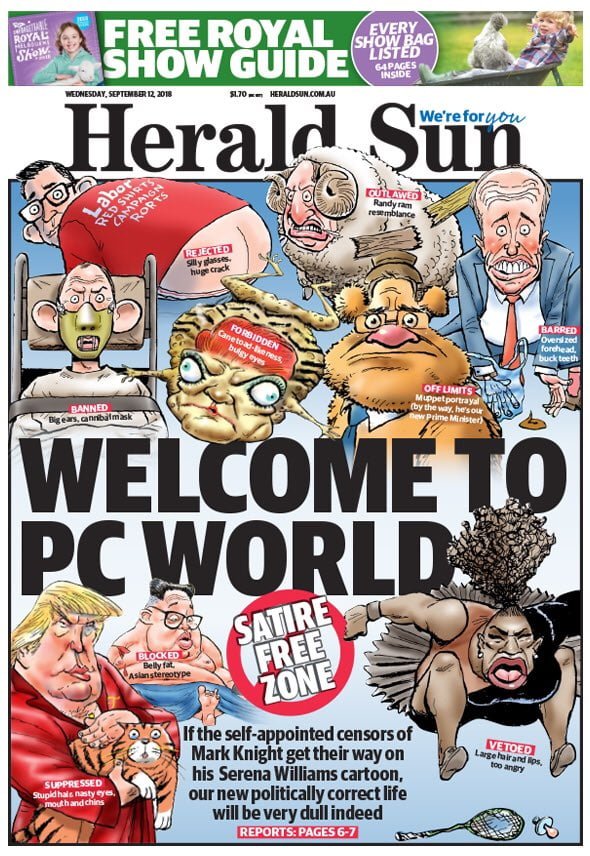 The Australian Press Council sees nothing beyond the usual humorous exercise

On 25 February 2019, The Australian Press Council found that the cartoon did not constitute a breach of standards and that it fell within the usual criticism of press cartoons using the devices of exaggeration and absurdity.

The board ruled that the newspaper’s intention was simply to denounce Williams’ “childish behaviour in depicting her jumping on her racket and throwing her dummy” and that the cartoonist did not intend to negatively represent any race or gender as the image was done in the cartoonist’s usual style of several decades and was only intended to be a “sports cartoon”.

This is not the first time that a Mark Night cartoon has caused controversy, this one from 10 August was also branded racist. 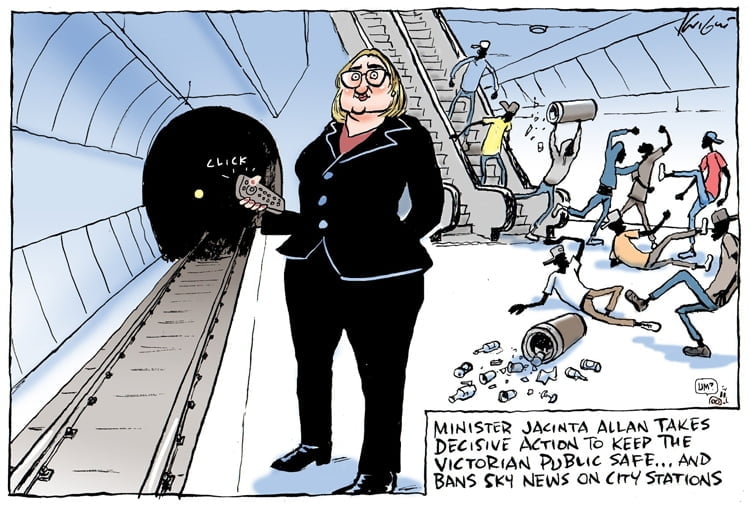 The image depicted Victorian Legislative Assembly Labor MP Jacinta Allan standing in a train station pressing a remote control. Behind her, a group of African teenagers are fighting.

The image was accompanied by the caption: ‘Minister Jacinta Allan takes decisive action to keep the Victorian public safe … and bans Sky News from city stations’.

Jacinta Allan was criticised for saying she would stop Sky News broadcasting from train stations. She made the announcement after Sky presenter Adam Giles interviewed far-right leader Blair Cottrell.

In June 1999, Labour Party deputy leader Jenny Macklin said that a cartoon by Mark Night, and another by Bill Leak, about Senator Meg Lees, were offensive and demeaning to women politicians, reflecting a limited and unimaginative view of how women in high level political office should be portrayed.

For Macklin, women were stereotyped as housewives, or objects for male sexual gratification, rather than portrayed as politicians. 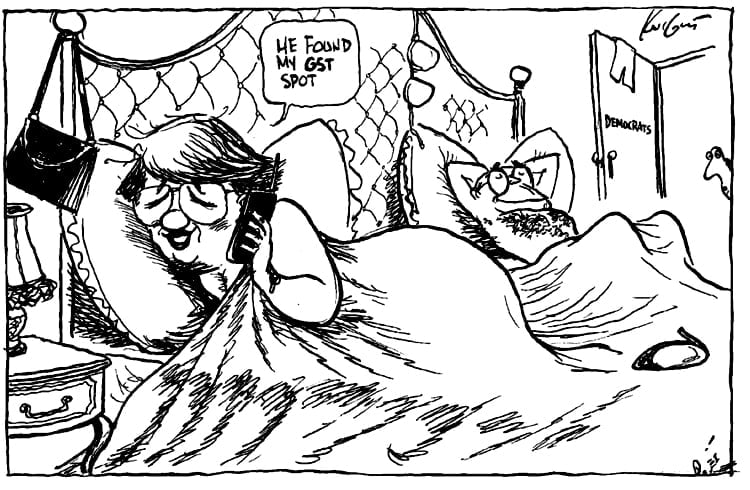 Senator Meg Lees and Prime Minister John Howard, cartoon by Mark Knight published in the Herald Sun on 29 May 1999. 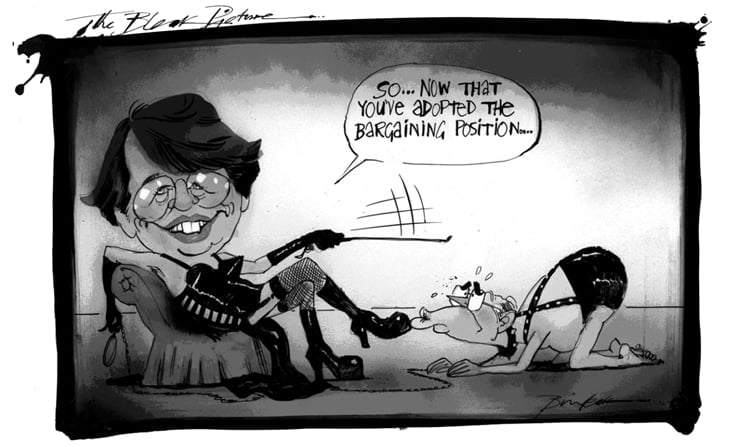 Senator Meg Lees holding the whip with Prime Minister John Howard at her feet, cartoon by Bill Leak published in “Weekend Australian”, 22-23 May 1999.

Bill Leak was embroiled in a number of feuds in 2016 when the indigenous Australian community protested one of his cartoons which they considered racist and another image in which he linked same-sex marriage to Nazis. Bill Leak died in 2017 at the age of 61.