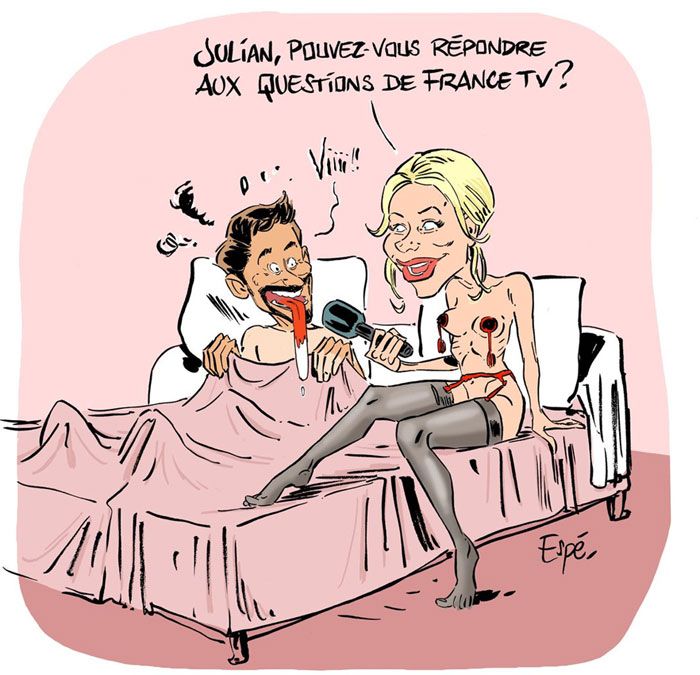 Espé’s first and last cartoon in the new Tour de France section of the newspaper L’Humanité.

French cartoonist “Espé” may have broken a record. He has been fired just after his first cartoon was published in a section that was inaugurated by the newspaper.

Sébastien Portet (1974), who signs his name as “Espé”, was collaborating for the first time in the French newspaper and sent this joke that illustrated a text by the controversial former cycling coach, Antoine Vayer, who has also been fired (I don’t know if it was for something in his text as I have not been able to find it).

In the image, the cartoonist depicted the semi-naked and lingerie-clad retired cyclist and model Marion Rousse, now a cycling sports commentator on television, interviewing her current partner Julian Alaphilippe in bed, who appears with his tongue hanging out, drooling.

There are not many traces of a joke in the text. The truth is that, as a cartoon, it seems to me to be a piece of cake and older than a forest. It reminds us of those dirty jokes, with no more background, of the uncovering era that were simple excuses to draw chicks with their balls, maybe he wanted to make a revivalof the genre, who knows. I don’t think he didn’t give it a chance and this kind of thing doesn’t go down well with, let’s say, the general media.

Marion Rousse commented as follows the cartoon with her caricature on Twitter:

“Disenchanted, L’Humanité is increasingly its name gets worse and worse. You don’t have to have the slightest respect for women, for women, to bring six years of sports analysis on television down to this level”.

In the wake of the controversy, the newspaper apologised to readers from their website for the cartoon, calling it “degrading and sexist”, and announced that it would no longer be working with the two contributors.

“We have decided to stop working with the cartoonist Espé and the columnist Antoine Vayer, a partnership we initially established for the duration of the Tour de France. The reason is the degrading and sexist

cartoon signed by Espé, aimed at France Television analyst and cyclist Marion Rousse, reduced to a sexual object interviewing a Tour competitor, Julian Alaphilippe, who revealed to be her sentimental partner”.
On Twitter they also apologised to Marion Roussse.

“We fully share the indignation about this cartoon.We quickly withdrew it. It is contrary to the values of L’Humanité

, which promotes human dignity and the feminist struggle. Marion Rousse, forgive us for this lack of vigilance”.
The cartoonist also she said to AFP about the move:

“I feel sad, sad, sad. The newspaper has apologised, the drawing has been deleted and I am no longer working for L’Humanité. My aim was not to hurt, not at all, there was no malicious intent, it was just a caricature…. When a drawing is not understood, it is a mistake, but I would never have thought that it could reach these proportions”.

Espé also said ;“I wanted to evoke the porosity between media and sport (?) and I wanted to be inspired by Tex Avery’ s drawings “. It is possible that Espé found the joke or the supposed criticism funny in his head, but everything points to it being something that only he saw or didn’t know how to work out. Be that as it may, it was an attempt at a joke and the media has decided to take the high road. The author is not a newcomer, he has been since the 90s in the world of comics, although his debut in graphic humour can already be classed as little less than a prick.

El humor en apuros, compilation of cases (III)
Cases of cartoonists who have had problems of some importance because of their cartoons or satirical illustrations. There are also some stories of other people who, without being cartoonists, have got into trouble for sharing them.