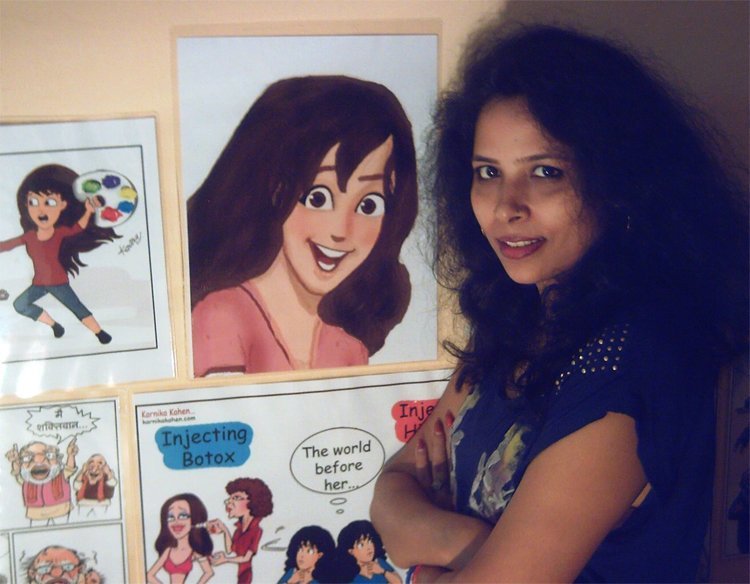 Karnika Kahen is a female character, nicknamed “Everywoman”, with a certain resemblance to her author, Kanika Mishra, even in the name.

The problems for this artist born in Lucknow, a city in the state of Uttar Pradesh, began in 2013, when she decided to draw cartoons critical of Asaram Bapu, a popular religious leader, a self-proclaimed god-man who had been accused of raping a minor.

Among the cruel and insensitive comments made by political leaders in India about rape, one that stood out was that of spiritual leader Asaram Bapu referring to the internationally publicised case of a gang-rape victim in Delhi in late 2012. The raped girl, Jyoti Singh, 23, died 13 days after the assault, which took place on a bus she was travelling in with a friend. One of the rapists, Mukesh Singh, said that it was the girl’s fault and that “a raped woman should not defend herself”.

The young woman was baptised by the press with the pseudonym of Nirbhaya (the one who is not afraid, without fear) for fighting her attackers until the last moment and because in India a law forbids the publication of the names of rape victims.

In January 2013, Asaram Bapu said that Nirbhaya was also guilty of being raped and added that the girl could have avoided the rape if she had begged for mercy from her attackers, called them bhaiyas (brothers) and prayed the Guru-mantra . (sic)

As expected, such stupidity upset a lot of people and generated a lot of debate, also provoking Kanika to start drawing cartoons alluding to Asaran Bapu, his followers and the assault on women. 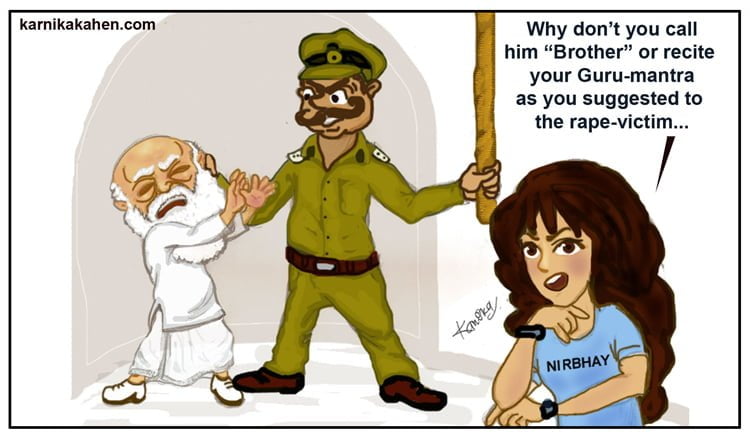 Kanika cartoon, 31/08/2013 *Why don’t you call him brother or recite your Guru-mantra as you suggest to the rape victim?


That week, his cartoons started to spread and were published in various media. Even on some TV channels. And Asaram Bapu‘s many followers became very angry.

He soon started receiving insults and threats of death and rape on the internet.

The threats were serious and growing, according to the author’s own account:

I started receiving so many death threats that my phone never stopped ringing. Many men were calling me to say: “You have defended Nirbhaya

and insulted Bapu. Now we are going to rape you like they raped Nirbhaya”.
Receiving threats like this in India is a cause for concern, India is one of the countries with a “rape culture” and assaults on women and girls are a scourge. In 2014, more than 2000 rapes were reported in New Delhi alone.

Kanika also had to suffer other forms of harassment.

They hacked all my accounts on Facebook, Twitter and even my email to stop me from drawing. For 5 months I was afraid to go out of my house because I was afraid someone would throw acid on my face… Asaram Bapu’s followers even came to my door.

However, Kanika was not intimidated and continued to draw. She also decided to report the threats to the police and continued to denounce publicly that they were trying to prevent her right to express herself freely.

“Even though I was receiving messages of support, I even received an international award

from the CRNI in 2014, I was terrified at every step I took. To this day I still have a few questions.

Why is it so easy to threaten women in this country? Why don’t we have freedom of speech? And why do political leaders and other personalities believe they have the power to control everything?

Today I have defended my work, but in exchange for what? Tomorrow any woman can be another Nirbhaya, the country will cry for a few days and then forget? When is this nightmare going to stop?

Kanica prefers to skip some questions with indiscreet dates. She is very kind but above all patient, I have not stopped bombarding her mail with my doubts and she always gives me back many interesting clues to understand certain important details that escaped me and that are now part of this text.

Since when have you been drawing?

I started my career when I was in the first year of my graduation (B.F.A) drawing cartoons for the children’s section. I tried to get a job to draw political cartoons and I kept drawing and sending my cartoons to newspapers continuously, but I never got a chance to become an editorial cartoonist. So one day I decided to forget about that dream and I went to work for a graphic design company as a web animator and designer. Since 2013 I spread my cartoons on Facebook and since then I haven’t looked back.
I have my own website where I publish the cartoons and many newspapers use them without my permission and publish them, but even then I don’t get any formal offers to work for any of them. My cartoons are seen by millions of people now.

When did you publish the first cartoon about Asaram Bapu?

On August 31, 2013, which was later carried by other media, including the Aaj Tak TV channel, India Today.

Did anyone suggest that you stop drawing?

It was some police officers but because of the concern, until Asaram Bapu’s followers calmed down a bit, it was just a friendly suggestion, not strict advice. I must say they were very cooperative and willing to help.

Do you know if anyone was ever arrested for the threats you received?

I don’t know. However, the threats were gradually reduced after I filed the complaint.

Are you now afraid to draw about religious issues?

No, not at all! I didn’t stop drawing when I was receiving continuous threats…. Although it’s not like then, I don’t receive threats for my cartoons these days, I still receive some hateful messages, but I have “thicker skin”. I understand it’s part of the job. 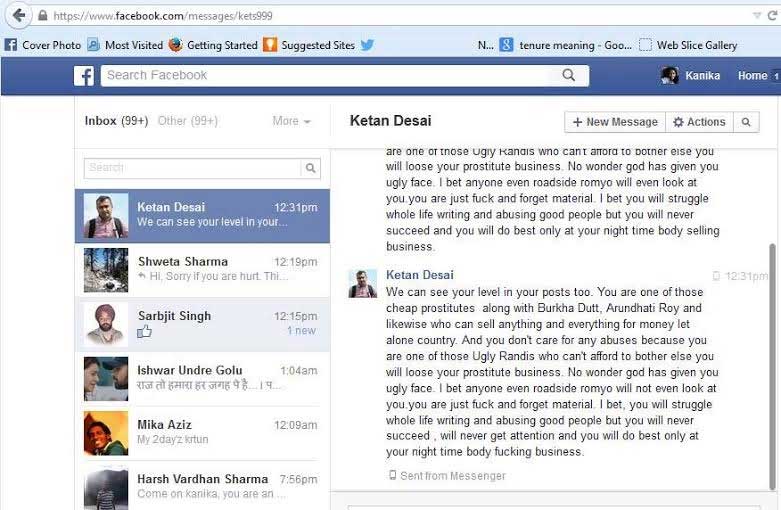 
Fortunately, it’s not as aggressive as when I drew the cartoons about Asaram. I recently drew a cartoon about another “godman” that prompted the withdrawal of a comic that parodied him. I did it as a sign of protest. 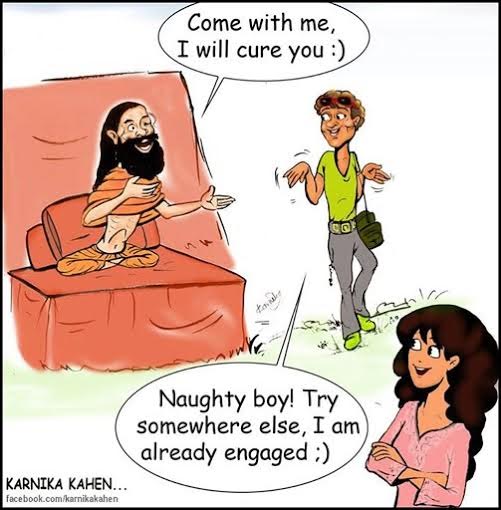 Do you think there are forbidden or untouchable subjects when it comes to cartoons?

Yes, that’s why I often ask myself questions that the media and other cartoonists generally avoid. 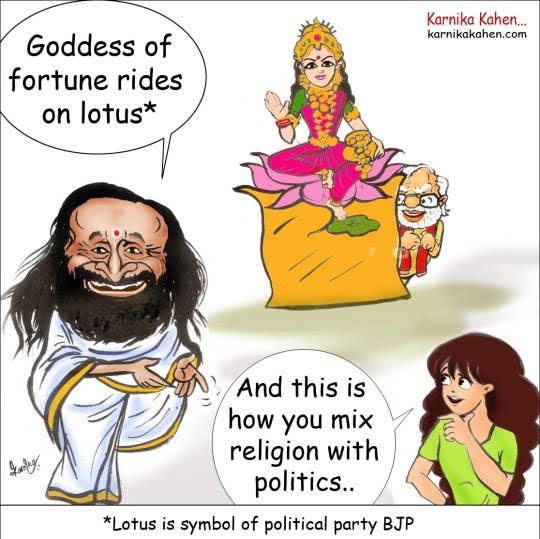 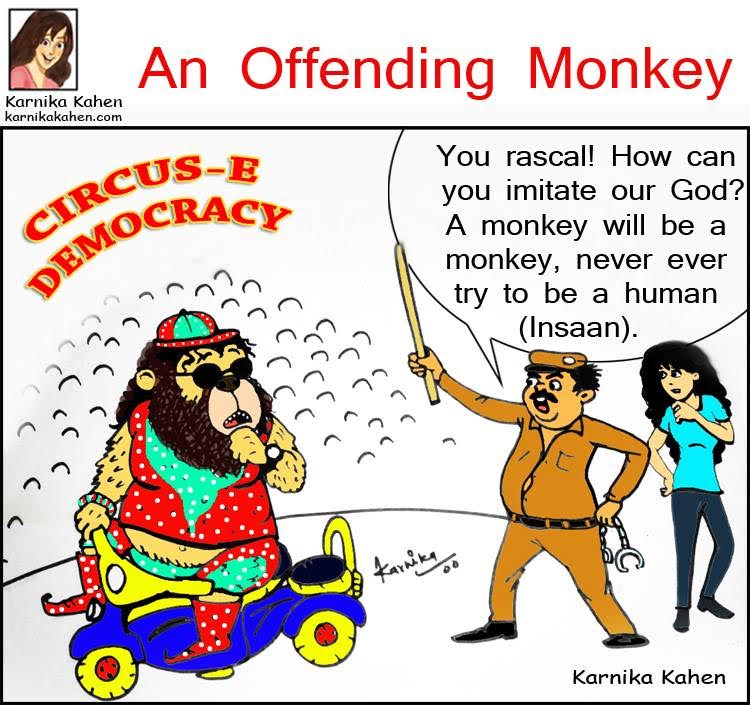 : Do you think it is harder or more difficult for a woman to work as a cartoonist than for a man?

Yes, especially in India, where people immediately use a tone of contempt and hatred when they don’t agree with a cartoon. They use bitter and abusive language with a woman that they would not use with any man.

: Are there other women cartoonists active in India who address political issues?

There are a few, though they have avoided drawing on serious political issues. At least until recently I had not heard of any such issues, as far as I can remember, but now other women cartoonists are also becoming more active.

What is the position of the media and those in power on the rape of women and girls?

I think the role and the reaction of the media to the increase of this kind of problem is always positive. The reasons for the disappointment are more in the response of our political leaders, it is not about any particular political party, but the general attitude and political will to fight crimes against women, it is not very strong, there is not much determination.

Related, cases in other countries.

Interview (2015) – Juarma López: “I don’t like cartoonists who are kind to the reader”

Interview (2016) – Nadím: “I have to admit that I am self-censoring when it comes to religious and football issues”

Jammu and Kashmir, cartoonists under blockade