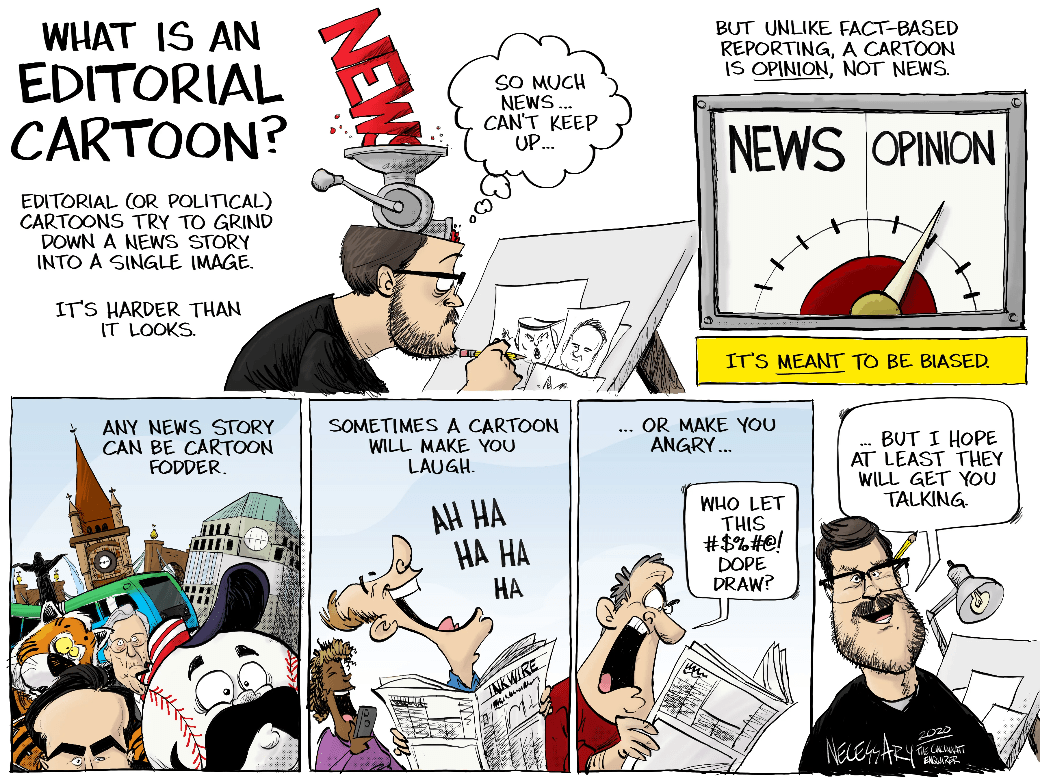 What is a editorial cartoon? by Kevin Necessary

The editorial cartoon, press cartoon, joke, strip, humour or graphic opinion is usually defined as an illustration or cartoon containing a commentary that usually refers to current events or personalities or national or international news. The editorial cartoon is always linked to current affairs, as its relation to a recent event is what gives it the characteristic of a journalistic message.

I never liked the idea of calling (political) cartoons in the press “editorials”. I’m not sure if they started to be called that to differentiate them from those published in any medium other than newspapers or because of the need to create a genre to the taste of the journalistic packaging.

The tagline seems to imply that they are those opinion cartoons that fit the editorial line like a glove. A complement to the more political editorials of the medium by unwritten law. Although in many cases this is the reality, there are also times when the opinion cartoonist “rebels” against the positions of the medium and offers alternative approaches, sometimes even provoking conflicts with advertisers and/or readers.

I don’t believe in this simplistic mantra that if the cartoonist doesn’t charge everyone then he is someone’s buffoon. Who made this nonsense into a sacred law? Cartoons are the opinions of the people who draw them and that is why they are always published in the opinion section of newspapers.

Nor do I consider a cartoonist to be a journalist for processing information with the intention of creating a more or less humorous opinion. The work has been done before by the journalists, who have worked out all the information they need to work with.

This could be the subject of a whole tome because it has many more nuances, even within “political” humour there are colours. Each author has his or her own stamp in terms of style and form. Some practice white and costumbrist humour, others more critical satire or a mixture of both. So we’ll leave it for the theoreticians or for one of those days when I have an attack of intensity.

But what is an editorial cartoon?

The illustrator and cartoonist of Cincinatti, Kevin Necessary, published this short cartoon-strip-history trying to explain what to his criterion is an editorial cartoon taking advantage that he announced that he had been hired by the Cincinnati Enquirer newspaper, after several years drawing cartoons in local press.

In the introduction he states that his definition is for political cartoons, traditionally associated with newspapers. He defines them as those in which an attempt is made to break down a news story into a simple image, something much more difficult than it seems. Just another opinion, as opinionated as any other.

“Too much news, impossible to keep up with”, thinks the cartoonist. Not only are there too many, but they also expire faster and faster.