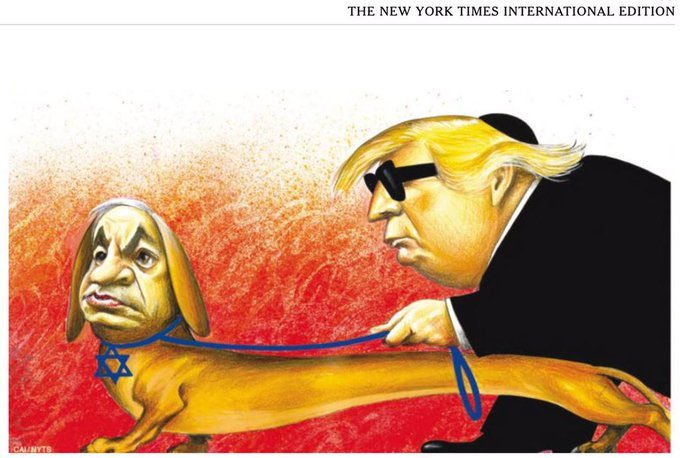 The New York Times apologised for this cartoon.

The fuss over accusations of anti-Semitism in cartoons is a perennial classic, not a year goes by without a good number of cases appearing, talk today of “withdrawing” or censoring a cartoon is simply absurd and provokes the traditional mass dissemination.

In this case, the matter ended in the cancellation of the contract with CartoonArts International, the company that provided the cartoons, and a punishment to the editor who chose the cartoon.

In the scene, Israeli Prime Minister Benjamin Netanyahu is caricatured as a guide dog for the blind with a collar from which hangs a Star of David and is pulling US President Donald Trump, who is wearing a kippah and dark glasses.

Some people pointed out that the cartoon was not related to any of the opinion pieces appearing on that page and that it was just an excuse to continue spreading anti-Semitic messages. 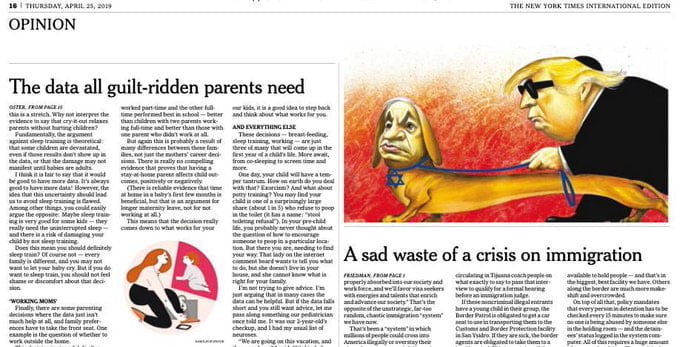 And as usual, the ball quickly got rolling and the cartoon was condemned as anti-Semitic, the catch-all for any criticism of the Israeli government. Complaints came from various organisations that attacked the newspaper and the cartoonist, including, of course, Donald Trump, Mike Pence and others.

As if the mess wasn’t enough, two days later and in the middle of the row this other cartoon was published , by the Norwegian Roar Hagen (Thank you, Sofi Siete), which heated up the atmosphere even more. More info. 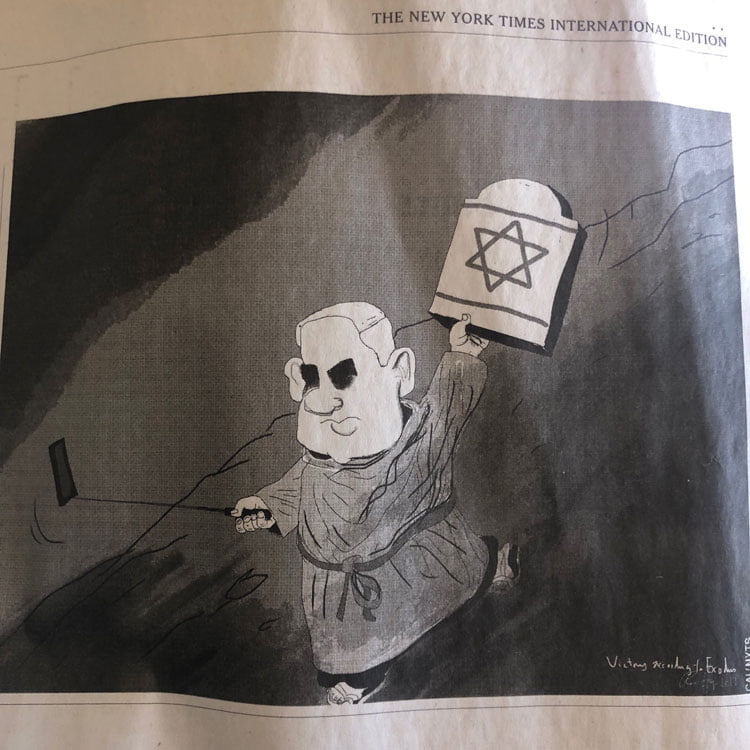 Some cartoonists opposed to Moreira’s opinion joined the party and reacted by versioning the cartoon.

The American A.F. Branco drew this version on 29 April. 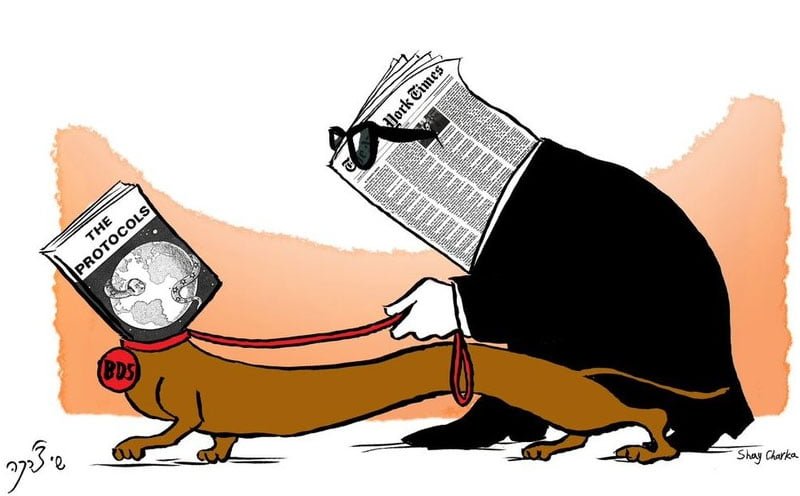 The interpretation by Shay Charka, an Israeli cartoonist for the weekly Makor Rishon, was published on 29 April

On Saturday 27 April, the NYT published its first editorial response to the cartoon, saying that the cartoon contains anti-Semitic tropes and calling it “offensive”, adding that the decision to publish it was a “mistake” and blaming the syndication system, while announcing that it has been removed. 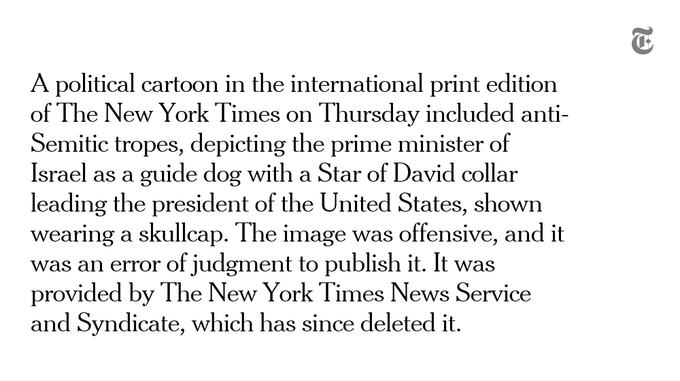 A day later, in another communiqué, they deeply regret its publication, apologise and assure that it will not happen again. They blame the process of selection and publication of syndicated cartoons and promise significant changes to the system.

On the same day, they supplemented this second statement with a longer note by Stacy Cowley entitled: ” Times apologises for publishing anti-Semitic cartoon”

Also that day they published an opinion piece by Bret Stephens with a stronger title: “A despicable cartoon in The Times” in which the cartoon is described as “anti-Semitic propaganda”.

“The paper should reflect deeply on how it came to publish anti-Semitic propaganda”.

On 29 April, the NYT formally announces that it will stop publishing syndicated cartoons in its international edition.

On Wednesday 1 May, The New York Times announced that the editor who had chosen to publish the image in its international edition would be disciplined (?) and that it was cancelling its contract with CartoonArts International, the company that had provided the cartoons to the paper.

They say they will no longer publish syndicated cartoons created by artists who do not have direct links to The Times.

In the meantime, there were those who scoured other cartoons by Moreira, who has been drawing for decades, and rescued one from 1983. The Jerusalem Post took the opportunity to recall it and publishes that, according to a JTA report from July 1983, the cartoon, at the time of the first Lebanon-Israel war, showed Israeli (IDF) soldiers pointing guns at Lebanese women and children, comparing them to Nazis.

Moreira’s 1983 cartoon (left) inspired by a historical photo from 19 April 1943 (right), by unknown author, showing German soldiers escorting a group of Jews in the Warsaw ghetto.

Moreira’s drawing is said to have won a prize at the 20th International Salon des vignettes in Montreal that year.

He was also reminded of another cartoon from 1992, published in Expresso, which caused a stir.

At the time, Moreira depicted Pope John Paul II with a condom on his nose. The cartoon was intended to satirise the Pope’s comments that chastity was the only way to end AIDS, not condoms.

According to The Jerusalem Post, more than 20,000 people signed a petition calling on the Portuguese parliament to take action to repudiate the cartoon.

In March 2009, in another cartoon, Morerira put the condom on Ratzinguer, this time on his head.

The cartoonist, for his part, rejected the accusations of anti-Semitism, saying:

“It is a criticism of Israel’s policy, which has a criminal conduct in Palestine under the protection of the UN, and not of the Jews

“.
In declarations to Expresso, Moreira qualified that Donald Trump’s position and his decisions on Israel mean the burial of the Oslo Accords, that he ignores the interests of the Palestinians and that is why he drew Trump as a blind man guided by Netanyahu.

On the use of the Star of David, he claims that it is only a graphic element for readers to identify Netanyahu, who is not well known in Portugal.

“Trump’s erratic, destructive, often blind policy encouraged Netanyahu’s expansionist radicalism”, “Ihave nothing against Jews, but I have many things against Israel’s policy“,Moreira Antunes wrote in an email response to an interview in The Washington Post

The position of the weekly Expresso

The Portuguese weekly Expresso not only did not apologise, it defended the cartoon and its cartoonist in a five-point statement in which it also denied the accusations of anti-Semitism.

1. Expresso has always defended freedom of expression and opinion, the principles of which we do not renounce. For 46 years, we have always been independent of political, economic or religious powers.

2. António’s cartoon is a space for opinion where, in this case, the author reflects his vision of US foreign policy. We understand that it does not include or propagate any anti-Semitic message.

3. We recall that António is a contributor to Expresso, an international award-winning cartoonist with a vast published body of work.

4. Expresso will never allow the publication of any anti-religious message, whatever the religion.

5. For members of the Jewish community and those who may have been offended by the controversy generated, Expresso clarifies that it was never the intention to portray Israel or the Jewish religion and its believers in a less dignified manner.