Cartoonist John Callahan in the documentary : Touch Me Someplace I Can Feel (2007)

The first news of a film about Callahan’s life dates back to the late 1990s. During his lifetime, the cartoonist confirmed that Robin Williams, in addition to having declared himself a fan of, had the rights to take his story to the cinema. The actor even went so far as to star in and produce the film.

This was Callahan’s answer to the question.

I’ve heard Robin Williams has the film rights to Callahan’s autobiography, is that true?

Yes it is, and here is an excerpt from Callahan’s autobiography Don’t Worry He Won’t Get Far on Foot: The Autobiography of a Dangerous Man

Cover of the book by the cartoonist Callahan on which the film is based.

Callahan also said that, if the film was ever shot, he wanted Philip Seymour Hoffman to be the protagonist. (Source)

The death of John Callahan in 2010 and Robin Williams in 2014 left the project forgotten.

Whenever I hear about cartoonist films I think in slow and boring productions that will interest only a few people.

The cartoonist wake up, prepares a coffee and… sits down to draw. Fast-paced action. Or what is worse, dramatizations and film licenses with generous concessions to fiction.

I hope that Callahan’s case is not like that, because of the character’s peculiarity. It can also be used to polish and refine a little the different versions of the details of his biography that have been fattened and adorned according to who was telling it.

John Callahan, a life between drama and humour

The American artist and musician was born on 5 February 1951 and was abandoned. He never knew the identity of his biological parents.

He was adopted into a Portland orphanage by David Callahan (Dave), a Cargill worker, and his wife, Rosemary, an Oregon couple who believed they could not have children, although they later had five more children.

John grew up in The Dalles, Oregon, about 50 miles east of Portland and went to a Catholic school. In the fourth grade at St. Mary’s Academy he began drawing cartoons of the nuns and other pictures.
“I started drawing cartoons of rodents to entertain my friends in class”

“I used alcohol to hide the pain of abuse,” he said. “I felt like a stranger in my family,” John recalls.

“It was a circumstantial thing. The relationship with that nun really messed things up.

He graduated from high school and began working as an assistant in a state mental hospital, also worked in an aluminum plant. At the age of 20, John moved to Los Angeles.

The dependence on alcohol was increasing, his philosophy was to drink and live the day.  “One day, I could drink twelve beers, wine and whisky. He also experimented with other drugs, including marijuana and LSD.

“LSD scared me, it made me paranoid,” said John. However, alcohol was his drug of choice and would play a significant role in events that would change his life forever.

He himself described his youth as a succession of days between work and drunkenness with no other purpose. One of his friends, Kevin Mullane, said in an interview that drinking came closer to killing him than the accident.

“Ironically, the accident may have saved his life,” Mullane said.

In 1987, Callahan began writing his autobiography, Don’t Worry He Won’t Get Far on Foot: The Autobiography of a Dangerous Man. “I thought it was a good story to share with people,” said John.

In 1989, William Morrow published the book.

Some of his cartoons

On the night of 22 July 1972, after drinking an excessive amount of alcohol (some sources speak of beer and others of tequila), he gave the keys to his Volkswagen Beetle to his drinking companion.

The driver was so drunk that he crashed Callahan’s car at more than 140 Km/h into a pole. The driver was not seriously injured in the accident and Callahan never heard from him again.

Callahan suffered severe spinal cord injuries (C5-6) and was paralyzed from the diaphragm down. He also lost the mobility of many muscles in his upper body. He was 21 years old.

In the hospital he met his girlfriend, a Swedish girl named Annu, although Gus Van Sant took the liberty of extending a love relationship over time, without too much commitment, in the film, this did not happen in reality.

The truth is that Callahan, in his memoirs, points out that his relationship with Annu in real life was limited only to the hospital. He never saw her again after she left the ICU.

Although she could extend her fingers, she had little strength. After rehabilitation therapy she managed to recover and later hold a marker in her hand.

In order to draw, she slowly guided her right hand on the paper with her left hand, achieving simple, almost childlike images.

In this video you can see Callahan drawing (1:28). Images from the highly recommended documentary (not easy to find): Touch Me Someplace I Can Feel (2007)

Callahan continued to drink for several years until 1978 when he came to Alcoholics Anonymous. On his website, he described the exact moment he decided to stop drinking:

“After years of alcoholism and self-pity, one night, after spending a long hour trying to open a bottle with his teeth, it slipped out of his hands and rolled on the floor, out of reach. He looked at it for a while. Then he started screaming, cursing God for being a cripple. He screamed until he was exhausted and then cried for an hour.

Finally, a disturbing but comforting sensation came over him, as if a hand was calming him. When his assistant returned, Callahan said, “Hey, Alex, something very deep happened to me here, I don’t think I’m going to drink anymore”.

What did John Callahan die of?

Callahan died on 24 July 2010 at the age of 59, from complications during a pressure ulcer operation, although one of his brothers stated that the causes of his death were derived from quadriplegia coupled with respiratory problems.

13 books were published with their cartoons, one of them autobiographical and a CD with 19 songs entitled Purple Winos in the Rain (2006) 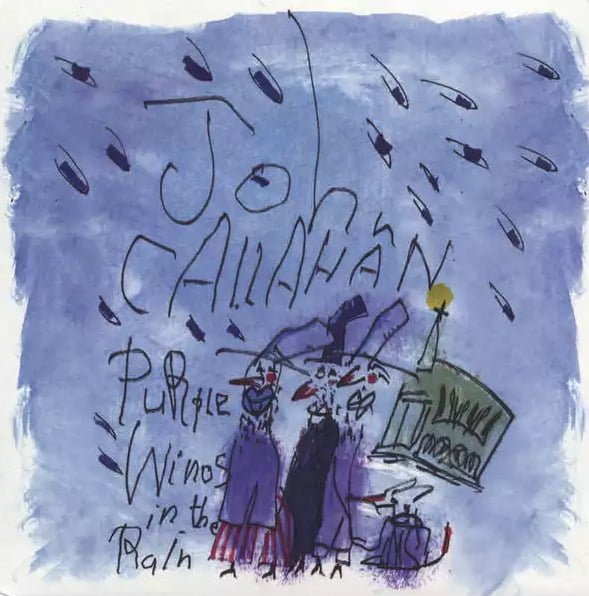 Two animated series based on his drawings were broadcast:

Pelswick, a children’s series on Nickelodeon.

And Quads, an Australia-Canada co-production, which does not deviate from the violence, joy of life and political incorrectness of its cartoons.

The cartoon that gave its name to his book and film is printed on the cartoonist’s grave on Mt Calvary Cemetery in Nothwest, Porland, Oregon.

As a professional cartoonist he started relatively late. His crude black humor and the topics he dealt with raised not a few controversies, some publications where he appeared received phone calls from advertisers threatening to withdraw their advertising.

The cartoonist also received mail and letters, some of these complaints are collected on the author’s website in a section entitled “Hate Mail from America”.

In 1996, Callahan sent a cartoon about a teenage Martin Luther King Jr. to the Miami Herald that was instantly rejected as obscene.

However, something unexpected happened. During the layout, a worker mistakenly included it for publication and the Miami Herald had to destroy 500,000 copies of the newspaper. That day, the newspaper decided never to publish Callahan’s cartoons again.

The scene shows an angry looking woman at the door of her son’s room.

A young man is standing by his bed, over which there is a puddle. The young man says:

The cartoonist always stood his ground on the criticism he received. In an interview in 1992 with the New York Times he said:

“The only compass I can use to know if I have gone too far is the reaction I get from people in wheelchairs, or with hooks instead of hands.

“Like me, they are sick and tired of people telling the rest of the world how to talk about cripples: with false compassion and paternalism. That is what is truly detestable.”

Despite this, it managed to be syndicated in a number of publications.

He also gained the attention of editors and the admiration of different artists and famous people who praised his work such as the comedian Richard Pryor, the illustrator Bill Plympton, the cartoonist Gary Larson and even Bill Clinton.

When Callahan was celebrating his 27 years as a cartoonist, he received praise from the creator of the Simpsons, Matt Groening, who said that Callahan’s works were:

“Rude” and “depraved”, in short, all the adjectives that cartoonists want to hear. “

A park to remember John Callahan

Facebook group of friends and family of John Callahan. In 2014 they promoted the construction of a memorial park in the Northwest District, Portland (I don’t know if they succeeded)

One of the initial ideas for the memorial park remembering John Callahan.